In 2010 there was much attention paid to Lord Judge, Lord Chief Justice and the judiciary`s then main man.  And when he commented on the jury system everybody listened.   But critical comment was………… pianissimo. The good lord had explained his discomfort in that jurors might seek further knowledge from outside the courtroom when considering facts pertaining to a case. In other words they might seek to increase their knowledge by the common man`s most accessible source of information……the internet……. which might offer many things but in general terms is an enormous fantasamagorical library with an indexing system easy enough for Joe Blogs to find in seconds eg the Italian musical term for playing softly. But in the good old days only toffs and so called intellectuals had shelves full of books which contained information that was or could be useful for or of interest to them.  In effect the LCJ was complaining that ignorant jurors trying to fulfil their task were seeking knowledge outside the courtroom which others in their group might already have possessed by virtue of their education, profession, general or specific knowledge or quite simply a higher IQ.

Of course in those days old or good most such folk declined to serve on juries; they were too busy or considered themselves too important to judge their fellow man. Now that`s all changed and everybody……..or is anybody a better description?……..can be chosen for jury service. And that`s the point. There is no consideration of anybody`s intelligence or ability to follow the performance, to appreciate the hurdle “beyond reasonable doubt”, no test to ascertain the limits of anybody`s understanding of the English language or anybody`s capability of balancing the credibility of witnesses or the facility for anybody to comprehend a judge`s summing up. Truly anybody can be a bit thick but then that`s why we have a jury of twelve people who can be anybody. Of course under current attitudes supposedly handed down from Magna Carta and modified for current times peer review by any other term is what determines a defendant`s guilt or innocence.

Lord Justice Moses  also entered this debate. He advocated that trial judges should rule on matters of fact, and juries, instead of weighing all the evidence as at present, should simply be given a list of questions to answer. It is not unreasonable to infer that he was alluding to an inclination that complex argument might be beyond the wit of some jurors. I agree. Members of the legal profession were and are  unlikely to be supportive. They would deny that pecuniary interests serve their opinion. Magistrates at the very bottom of the judicial pecking order are well acquainted with defendants on either way matters selecting jury trial over summary trial; they consider that they are more likely to be acquitted…..a statistic which is open to question. With crown court legal aid rates higher than those at the lower court to dismiss legal pecuniary interest out of hand in court matters would be presumptive in my opinion. Universal jury service is now an outmoded concept and sooner or later a senior member of the judiciary, probably after retirement, will step into the public arena and say so. This is not to say I am advocating judge[s] only courts……I am against the practice of single District Judges acting in trials as both judge and jury. I am suggesting that the concept of juries now constituted is not an 11th commandment notwithstanding the recent paper Are Juries Fair?    Another interesting paper taking a wide historical perspective is A Historical and Comparative Perspective on the Common Law Jury .

To bring the arguments forward five years, today`s Times behind its paywall 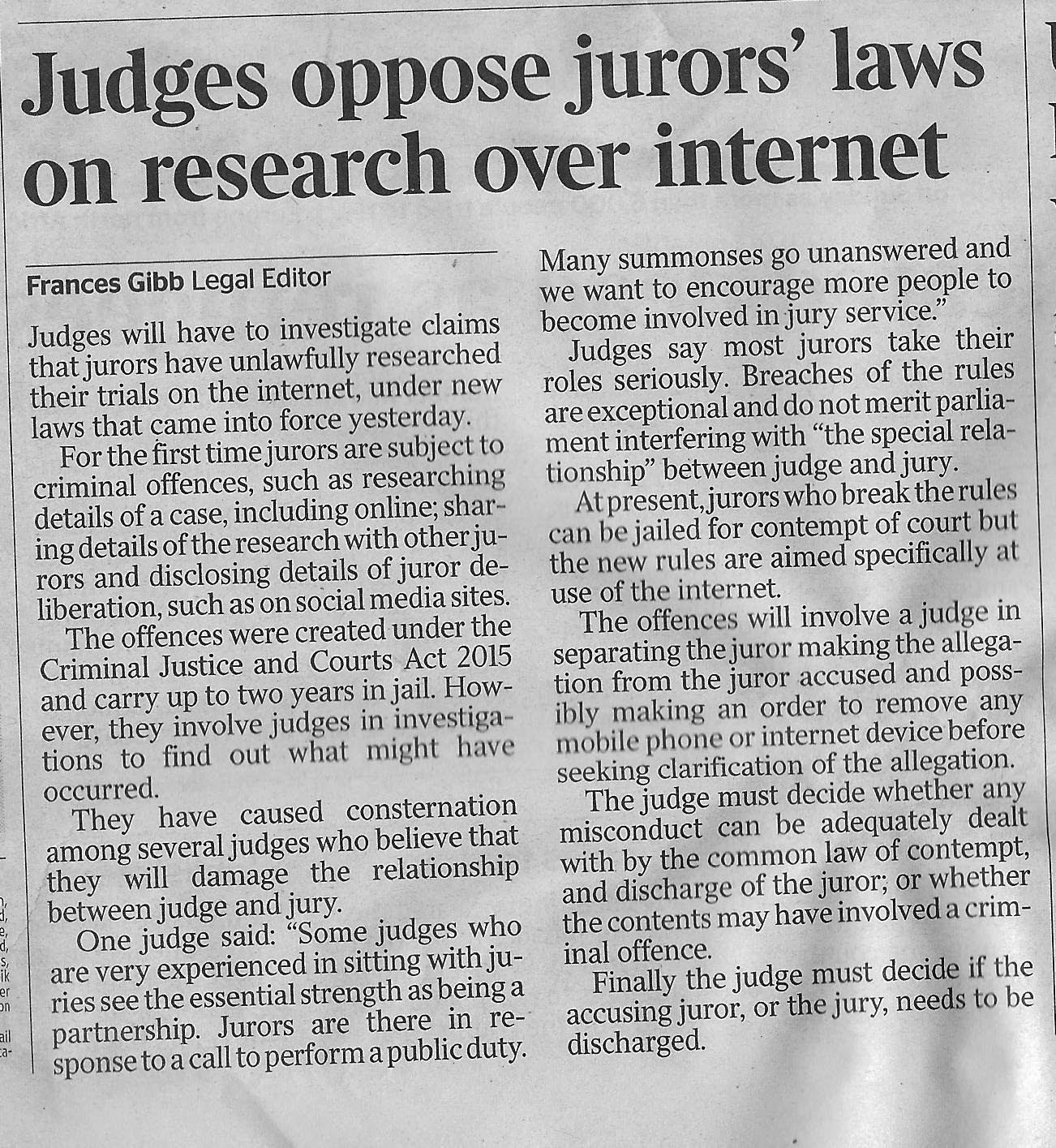 reports that the outgoing government`s dying spasms included the Criminal Justice and Courts Act and  amongst other iniquitous features of that Act it makes it incumbent upon judges to investigate during trials the possibility of jury misconduct.  The question will be for the new government as to how much criticism by the judiciary it will take to make amendments and for the judiciary how much it can be seen to oppose parliament.